A survey was done in the UK, and the results showed that approximately 528,000 people are addicted to gambling. The result also stated that 80% of them end up having bad debts that eventually destroy their financial status.

Once you get into betting it becomes tough for one to stop. It is for this reason that two challenger banks came up with a solution to this bad habit. They have come up with mobile apps that give the current account holders of these banks the option to block all the payments to any registered gambling operator.

This feature is meant to help the players who are trying to stop spending on gambling. Tony Franklin, a former gambling addict who is using the app to quit his bad habits, talked to The Daily Mail and he confessed how gambling had consumed most of his adult life. He continued to say that the bad habits had led to him losing his home plus his family two times. His life kept getting disorderly. His relationship with banks got worse. He said that the gambling life affected his entire life; family, friends, employment, financial state, housing and eventually his health.

Tony has interest in challenger banks market as a whole. He kept looking for a bank that would come up with ways that would help him control his spending habits, and his research led him to Starling bank. Franklin says that ever since he started using the feature, he has been able to withdraw from gambling. The element has prevented him from falling back to the bad habits as many players do. They quit, and after a week they fall back. He says the bank has played an essential role in trying to get his life back on track. He has been able to pay off some debts, but he still has others. He says he will pay them with time.

Tony Franklin believes the feature is the only way to get out of the ‘cauldron of chaos’ as he calls it. Before the banks came up with the feature, players were forced to go to the gambling operators and convince them to block themselves from receiving any payments from the player. Starling bank was the first to come up with the feature, and after a short while, Monzo followed. The two banks have accounts that are operated through a mobile app. Barclaycard also offers the blocking services to their credit card holders to enable them to block their credit card from making transactions to any registered gambling operator. This is done by talking to their customer care.

The UK Gambling Commission (UKGC) has revealed that Ladbrokes misguided them at the period during which the investigations into the Black Dave case were ongoing.  The puzzle concluded yesterday after a statement was released warning bookmakers to be careful when dealing with Rule 4 deductions in horse racing. 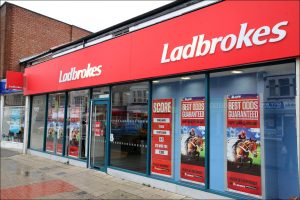 Last year, David Evans was handed a fine by the ruling body that monitors the local racing environment for delays in releasing notifications of the non-runner, Tango Sky. The investigations found that this was a chance for him back Black Dave who was also a new entrant before the odds of Tango Sky were removed. During the time of placing his bet, Evans also told Ladbrokes that he intended to withdraw from Tango Sky if not for the change that happened shortly after he placed his bet.

Ladbrokes claimed that they were not sure what exactly had led to the reduction of Tango Sky’s odds soon after David Evans placed his bet as that the event took place about three years ago. The UK gambling regulatory body, however, managed to dig out evidence which proved that the bookmaker had made that action to increase the deductions that would be made from bets that won that had already been placed as stated in Rule 4. The commission showed that Ladbrokes had not been successful in reviewing the information that was available to them before providing inaccurate explanations as a watchdog that directly deals with the clients.

The Commission further indicated that the gambling operators must consider that the series of events that occurred in the Black Dave case as well as the Ladbrokes’ actions was a reminder that the relevance of the industry, in the long run, was dependent on customer trust. The commission further expressed that they would proceed to monitor the issue ad if required, would use its formal regulatory powers to punish the bookmaker that has been found in breach as well as the industry in general.

Ladbrokes was lucky to evade punishment even after they were found in breach of the terms discussed earlier. This was because their actions were not under the category of conditions that violated the license or the code of conduct that has been set by the UK Gambling Commission in relation to the terms of the application of Rule 4.

Moreover, Ladbrokes, which is a British Bookmaker, was credited with bringing the case before the local racing regulatory body on the day the race took place. During the period of the investigations being conducted, it turned out that the bookmaker saved a total of £7.70 only by cutting the price of Tango Sky which ultimately did not make any significant difference in its profits.

Ladbrokes released a statement on the issue saying that the company had initially interpreted the series of events that led to the price change incorrectly as the time it took place, but this had only become clear after the case was reviewed adequately. Moreover, the company also pointed out that as a matter of fact, the reduction of Tango Sky’s odds was in contravention of its trading policy at the time and showed that its trades had been signaled about it.