The authority in the UK that oversees advertising matters has recently been put to task investigating claims and complaints regarding the number of betting ads that ran on mainstream media during the world cup tournament. 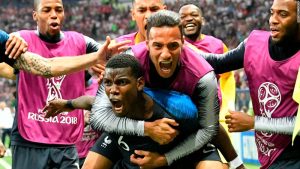 The authority is looking into the matter to determine whether the newly set up rules and regulations meant to curb the gambling problem are being adhered to. The companies that are the primary target of these investigations are prominent betting companies such as Bet365, Coral and William Hill.

The Advertising Standards Authority (ASA), which is the authority that is responsible for handling and streamlining advertising matters over the course of the month-long world cup tournament received approximately 115 complaints from viewers regarding the number of gambling ads that were running during the event. This compared to the number of complaints received by the authority before the beginning of the world cup tournament is about four times more compared to the previous month. This became an issue that the oversight authority needed to take seriously and look in to.

The oversight authority, which is the ASA, received these complaints about the course of the tournament. The allegations were not all similar, but most of the complaints received were in regards to the number and the amount of air time the gambling ads were getting. Most of the viewers who sent out these complaints were unimpressed by the numerous advertisements that kept running during this time. Research by the authority has gone to show that the average viewer was exposed to approximately 90 minutes of gambling ads during the whole tournament.

The emphasis with which the gambling ads were being aired became an issue especially since the tournament did not only appeal to the adults but also to the younger generation. This means that more and more kids were watching the progress and the happenings in the world cup and by virtue, they were exposed to these gambling ads. This did not augur well with more of the adult and aware generation who felt the companies acted irresponsibly and failed to consider the children who might be exposed to the ads.

There was a whole other issue regarding these ads which involved the ads that were running on breaks trying to entice the viewers to bet with their improved odds for short periods. These ads were like a call to action buttons that featured “bet now” offers which generally attract people to take action to try and benefit from these offers.

These offers are seen as a way of calling on people to act on these offers since they usually are time sensitive and can only be utilized during a short span of time. Promoting of the time sensitivity of these improved odds is very much similar to the “bet in play, now” message which the standards of gambling advertising discourage in relation to being responsible and problem or addictive gambling.

The investigations are ongoing where the ASA is looking to determine whether or not the techniques that the betting companies utilized during this time were in breach of the UK advertising code. The Advertising Standards Authority is analyzing the complaints trying to see whether there are legal grounds to launch a formal investigation into the companies’ advertising tactics.

The oversight does not in any way regulate the number of ads that will air, and the tournament which is the World Cup is not considered as a program that specifically targets children as it does not appeal to them primarily. And because of this, the tournament is not regulated by the same rules that ban gambling companies from running ads during programs targeted or are likely to appeal to the young generation.

The oversight authority states that the promotion of unique odds during a particular game is not prohibited. The “in-play” odds as they are customarily referred to are not the problem, but the problem lies with some ads that create some urgency to place a bet which is deemed as inappropriate by the authority. These are the ads the authority will be cracking down on.

The concern on this whole issue of gambling is for it being normalized. It’s supposed to be an adult activity, but as more young people grow up with the activity of gambling around them, there is the risk of them getting in too deep. As the betting companies continue to put an affiliation of sporting events with gambling, then the issue of gambling becoming a social problem is very much possible. The authority is trying to ensure this does not happen.