The night of Tuesday 5th June came with its share of luck and a pleasant surprise for Steven Bray, a 35-year-old hire controller for a fire station when he advanced to the stage at Mecca Bingo Oldham to receive his £50,000 courtesy of the National Bingo Game Jackpot. 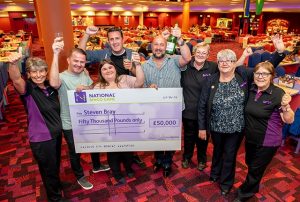 The lucky winner landed his £50,000 win after calling ‘house’ on the National Bingo game. Steven who is a regular at the club attending at least two or three nights a week was enjoying his evening at the club when it took an exciting and unexpected turn of events.

Steven would have wished to share his great achievement with his parents who introduced him to the game, but they were not there to witness his great win. He had lost his mother and father to a heart attack on July 11 aged 45 and September 2017 aged 69 respectively. In a move to befit his newly found status, Steven was alongside his sister and some of his bingo friends to witness the magical moment. Mecca Bingo Oldham who unveiled the pleasant surprise held a special party night for all their customers to celebrate Steven’s luck. The customers were treated to a buffet and toasted to Steven as he was gifted his cheque on the stage.

Steven mentioned that he had never won such a significant amount of money but was used to getting smaller wins all through the games. He also said that his mother and father never got to win such big prices as well, so he concluded the win came as a gift to them for introducing him to the game and never getting to gain any significant costs for their loyalty. In his statement, Steven said “Bingo is a little bit of me time, away from a hectic life: I have two jobs that keep me extremely busy, so it’s nice to take a relaxing break. Bingo is a good buzz especially when waiting for that last number to be called and it’s good to meet new people: It’s a laugh, and you never know you could win big. It was great to get my giant cheque, as I still can’t quite believe it”.

“My long-term plans are to pay off some of my mortgages and have a few holidays as I like to go abroad as much as I can: I have been looking at the Maldives, as I have always wanted to go there and now I will be able to. But first up is hosting a thank you party at my house for family and friends, with food and drinks on me: we will toast my parents”, was his response when asked how he planned on spending his winnings.

Tom Beverly, Club Manager at Mecca Oldham, commended Steven for his big win saying “It was great to see one of our longest standing players win the National Bingo Game: he really couldn’t believe it when we told him there and then that he had won the £50,000 jackpot. The whole club cheered, and we are thrilled to be a £50,000 winning club on the new National Bingo Game”.

A business developer Alastair Stewart commended Steven on his win as he marked the eleventh person to win the jackpot since the end of April this year when the new game was launched. The manager also added, “We are thrilled for out lucky £50,000 Jackpot winner at Mecca Oldham and hope that he enjoys his winnings, and of course his trip to the Maldives”.

One thought on “Double Smile for the Newest Baller in Oldham after Winning the £50,000 Jackpot”